Q and A – A Discussion - Researchment, Questions and Expectations 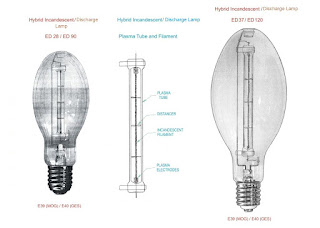 Depiction of Hybrid Incandescent/Discharge Lamp
- ED28/90; ED37/120 Bulb-size -
Q - What is it intended to be, how to look like?
A - Consider it roughly as in the depiction above.
Q - At first glance, as in the previous similar cases in discussion, it seems to show all the main component parts of a HID mercury lamp: arc-tube, frame, outer bulb, stem, screw-cap. Isn't it?
A - But only at the very first! If you look it a bit more attentive, you find something else...
Q - Yes! Is it the arc-tube that looks like a linear halogen lamp?
A - Well, isn't?!...
Q - Then?
A - You guess it!... The incandescent filament is in the midst of the arc tube, from one end to the other.
Q - So, to what is it related at most? Is it to the halogen lamp or rather to the discharge lamp?
A - Consider it related to both of them. It is a hybrid lamp. The discussion will make relevant to which one is it related at most, or to what extent of any of them...
More content to come...
Related posts:
The Halogen Hybrid Incandescent/HID Lamp
http://lightcommunitylighting.blogspot.com/2018/01/blog-post_31.html
SCALAR WAVE PLASMA ANTENNA
http://lightcommunitylighting.blogspot.com/2018/11/blog-post_29.html
THE HYBRID INCANDESCENT/XENON-DISCHARGE LAMP
https://lightcommunitylighting.blogspot.com/2018/04/blog-post.html
The Hybrid Incandescent/Neon-discharge Lamp http://lightcommunitylighting.blogspot.com/2019/12/blog-post_17.html
Posted by unknown at 23:22 No comments:

A Possible Discussion – Questions and Expectations 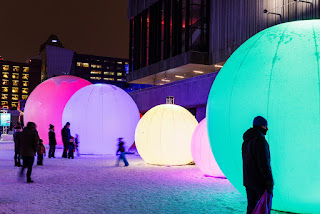 Image only for illustration and educative purposes

OPEN SOURCE EVERYTHING – QUESTION EVERYTHING
Q and A – A Discussion - Researchment, Questions and Expectations 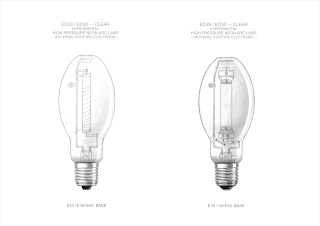 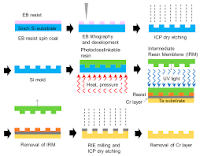 Q and A - A scientifically based discussion 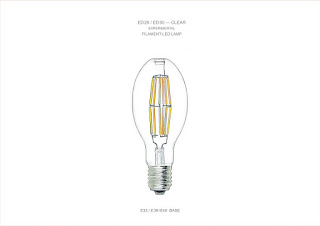 Depiction of  ED28/ED90 'Filament-LED' Bulb
Q - What is it intended to be, how to look like?
A - It is proposed to come in a form of a 'filament LED' bulb of ED23,5, ED90 or ED120 shape, possible with a number of 8 LED-filaments, 2 for each color, in a light color sequence of WHITE, PINK, BLUE and GOLDEN.
Q - So, is it similar to what is known as a filament-LED bulb in the nowadays state of art?
A - Yes, it is really a 'filament LED' bulb, but with the 'filaments' emitting light of different colors, each one, as described.
Q - If so, is it achievable as 'tomorrow', or 'next week', or 'next month'? Or does it need some particular research?
A - Yes, in principle it might be achieved. It depends however on what you have 'at disposal'.
Q - OK! If so, then let's see how can we get it. There were also comments on the 2012portal on this subject. So, how can the readers of the awakening communities have some of this lamps for their home or backyard?
A - We will find it together.
– The light color  sequence of White, Pink, Blue, and Golden, is with that of same color being on the opposing points of the 2 frames on which the LED-filaments, in number of 8, are positioned. 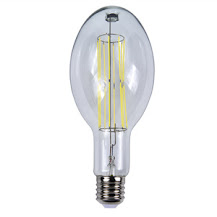 [Image only for illustration and educative purposes]

Q and A - A discussion, - subjects from this blog, - esoterics

NOTICE! This post is NOT scientifically documented, consider it for LEISURE only.

Q - We find many times in this blog that something is related to esoterics or esoteric purposes. Can you give more details, can we go into much more details, to have a better understanding what do you mean in this way?

A - Yes, we can! But, let's not go in deep details in this post. Better in another post may we go in details for each particular subject, as case might be.

Q - There were even on the 2012portal some comments about something like lampposts for esoterics or contact zones, or so. What are this?

A - Not the lamppost itself, but rather the lighting fixture, the luminaire, might be considered in this way. As an example, try to consider a post-top lighting unit/fixture with a large lampshade.

A - It may be, it is the first one which's blue-prints are posted on this blog. But, let's give a look to this one https://lightcommunitylighting.blogspot.com/p/outdoor-post-top-lighting-unit-extended.html, and, yes, considering that the inside having the same componence of that above mentioned.

Q - Yes! But it's still a common lighting fixture for outdoor general lighting, isn't it?

A - You are right! In this form it is, or might be so, thus it depends on what you put inside. The large volume of the lampshade allows you anything. So, let's go to the post http://lightcommunitylighting.blogspot.com/2019/01/blog-post_22.html, and look at the geometry patterns there.

Q - But, what have in common the lighting fixture with the geometry pattern?

A - As pieces apart they have nothing, but they will have if you put them together. So, you have to put  inside of the (lampshade) lighting unit a cage (made by copper, or else) in the form of the desired geometry pattern, with the bulb positioned as in the image on right.

– In the same way we invite you to take into consideration the effect of insetting  any kind of sacred geometry pattern (made by copper or else) in our proposed large size outdoor light units (surrounding the bulb, inside the lampshade).

– These outdoor lighting units are suitable to be placed around the buildings housing the tachyon healing chambers to attract more higher dimensional energy… As case may be, colored high power existing discharge lamps may be used.

Q - And another kind of usage for what you call 'esoterics'?

A - Imagine the effect of one or more outdoor post-top lighting units (as above, or smaller) which might be also installed around the Thachyon Chamber buildings, with each lighting unit having inside the lampshade a mandala of 12 light tubes, (circled around, inside the lampshade), with the colors of 'The 12 Roses' (thus there are described only 9): White Rose, Yellow Rose, Amber Rose, Green Rose, Blue Rose, Lavender Rose, Red Rose, Orange Rose, and Black Rose, to attract more higher dimensional energy…

OPEN SOURCE EVERYTHING – QUESTION EVERYTHING
Q and A - Researchment, Questions and Expectations 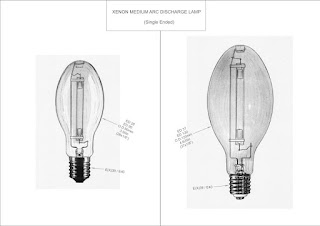 Q - Let's start from here: In a previous post you claim that you have only the Xenon, as a pure rare gas for high intensity discharges, for lighting. And you have here and there some Krypton arc-lamps, but not for lighting. Do you have to add something more?
A - Yes, that is! But we refer not to what is known as short-arc lamps or flash lamps. We will discuss about lamps that are not short-arc, nor what is named as 'long-arc' lamps.
Q - Can you tell more about what you find as 'long-arc' lamps?
A - There are commonly named so lamps that are also of high intensity discharge of high power, of KW.
Q - And the arc tubes of the lamps shown in the depiction, what kind of arc length are?
A - We named them as medium-arc, only to make a distinction from that one of long or short arc, thus you find it not as a category. Consider them arc tubes of xenon flash lamps adapted for the experiment.
Q - And, will these flash lamp tubes work in a continuous mode, instead of flashing?
A - You need to achieve a stable arc discharge. If there is, you might have surprises with overheating. You need either to underdrive them, but maintaining arc stability, or to use large outer bulbs and a heat conductive gas that also prevents arcing. But, that's the research, that's the experiment, that is when you question...
content to come...
Posted by unknown at 10:21 6 comments: